…and listening to rock in the car. I have no air conditioning, so listening to anything delicate and acoustic is a losing battle.

Music For Airport Furniture by Stephen Whittington is a work for string quartet that alludes to Brian Eno’s ambient Music for Airports and his acknowledged predecesor Erik Satie’s Furniture Music. The work was created specifically for the event Psychedelic Rays of Sound.

And now, on the occasion of Robert Fripp’s 68th birthday, some rare video:

I’m looking forward to this one, sounds interesting. 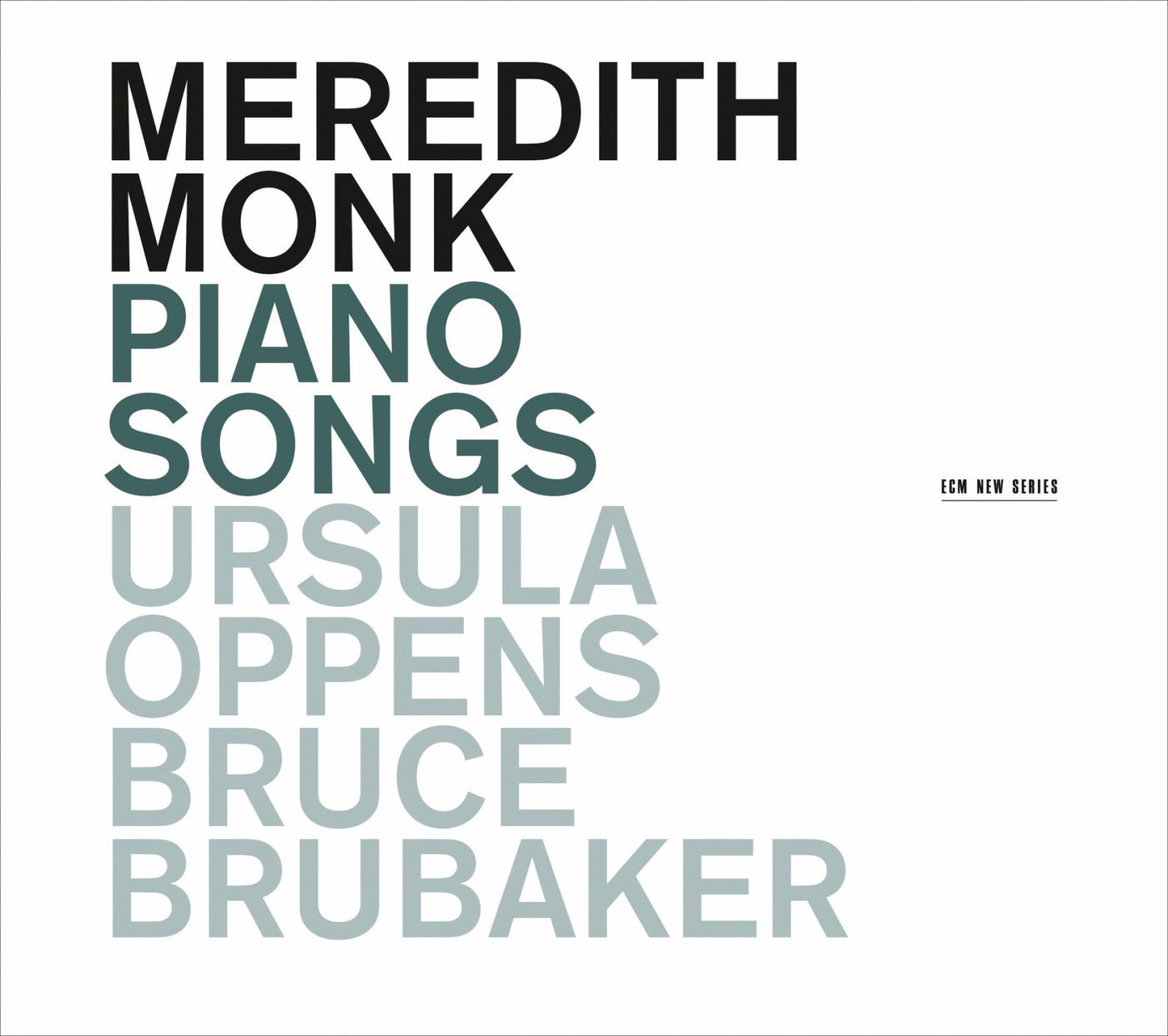 Meredith Monk is best known for her vocal works. However, she has been writing for the piano since early on in her studies and has mature works in her catalog that date back to the 1970s. Starting in the 1980s, she began to write a number of pieces for piano duo. Both solo works and duos are represented on this ECM CD of her piano music, played expertly and energetically by Ursula Oppens and Bruce Brubaker. They even engage in a bit of hand percussion and vocal call and response on the ebullient “Folkdance.“

As Monk points out in her liner notes, these are pieces that may seem simple on the surface. This is deceiving. Accounting for all their details and dealing with the slightly off-kilter rhythmic sensibility that is so often brought to bear in…

For a Nonesuch Celebration at BAM, Reich and Glass Bury the Hatchet

Among the biggest surprises, and a measure of the regard in which the label is held in musical circles: Steve Reich and Musicians and the Philip Glass Ensemble will be sharing a program, something they haven’t done since the 1970s, when they apparently had a falling out that each has consistently refused to comment on publicly. The two ensembles will play three programs (Sept. 9-11) that will include many of their major works, including Mr. Reich’s “Drumming” and “Music for 18 Musicians,” and excerpts from Mr. Glass’s “Einstein on the Beach,” “Koyaanisqatsi” and “Music in 12 Parts.”

The Philip Glass – Steve Reich thing aka the feud

Steve Reich on Philip Glass: By early 1968, he had done a piece called One Plus One. And One Plus One was to Phil what It’s Gonna Rain was to me. It was his first original musical insight – the additive process. After that, he wrote a piece which he dedicated to me, but later took the dedication away. It was called Two Pages for Steve Reich, but is now Two Pages, subtitled Music in Unison. Basically, what happened between Phil and me was very much the kind of thing that had happened to me with Riley, which is a lot of things are floating around in your mind and somebody comes along who really sets things straight. The difference is that, for whatever reasons, he has been unwilling to admit that. And that has been one source of grief between us, for sure. I don’t quite understand, will all the success that he’s had, why that remains something he’s very uptight about. But those things happened; they are documented in programs, reviews, and scores. It’s not conjecture.

La Monte Young: …according to Steve, Phil and Steve had a group together, and Phil began to play the way he does after he was in a group with Steve.

William Duckworth: Everybody seems to have different stories about what happened.

La Monte Young: Well, Phil claims to come out of a vacuum. Nobody ever existed according to his book. At least that’s what I understand.

William Duckworth: What’s your interpretation of all this?

La Monte Young: Well, the story I tell is that there’s only one concert that I know of where all four of us appeared together. This was a concert that was put on by a group at Yale called Pulsa. They were doing a lot of work with light and…

Marian Zazeela: A lot of art and technology stuff…

La Monte Young: the concert was in 19…

La Monte Young: …and it was all tapes. I played a tape of Map of 49’s Dream—very sophisticated La Monte Young. Terry Riley probably played some of that two-tape recorder stuff he recorded with a saxophone—very clearly Terry Riley. And Steve Reich was sounding like Steve Reich. But Phil Glass played a piece that just sounded like a single line. It was either a violin or a saxophone.

Marian Zazeela: It was a violin.

La Monte Young: …and it just went on and on. It was incredibly dull. There was none of what you would call minimalism going on at all. Now OK, maybe it wasn’t a representative work. I don’t know. All I know is that’s what he played. Later on, I heard him…

Marian Zazeela: It must have been in the early ‘70s.

La Monte Young: …and there he was; he had a new sound. I don’t know what happened, but that was my experience. Now, maybe it wasn’t a characteristic piece. Maybe he had other pieces hidden away in 1968 that were just full of this minimal stuff. I don’t know,

From Talking Music by William Duckworth, 1995

Seth Colter Walls (TimeOut NY): You’re reuniting on a stage with Glass for the first time in decades. In between, there’s been a lot of talk about a feud, and hurt feelings. Too much talk?

Steve Reich: Well, look. This is Nonesuch’s 50th birthday. Bob called me up and said, “I’d like you to come and have lunch with me and Phil Glass.” And I said, “I’d love to!” And I’m sure he did the same with Phil. Actually, Phil and I had seen each other about a month before that, at a lunch—a kind of a homage to the Kronos Quartet, who had their 25th anniversary. People who had worked with them—both Phil and myself—were giving testimonials to how great they were. But the lunch, the idea, this whole [Nonesuch Records at BAM] project is Bob Hurwitz’s idea. And it’s a great one, and so here we are.

more from this recent interview here.

The translation of a string quartet into a guitar quartet might initially sound like a dubious prospect. After all, guitar, for all its many virtues, cannot match the sustain of bowed stringed instruments. That said, what the Dublin Guitar Quartet has done in recording transcriptions of Philip Glass’s string quartets is nothing short of extraordinary. They have recast the pieces to focus on their pulsating, rhythmic drive. But we don’t just get the impression of gestures with long notes shorn off. Indeed, in many places, even if we don’t have a violin taking a long-lined solo, the intensity the group brings to bear helps the listener to “feel legato” when we can’t entirely be hearing it. This is a recording of the quartets that reinvigorates them from a fresh vantage point; I’m very glad that the Dublin Quartet…

we promote, research, perform and educate

a kaleidoscopic view of music

Make Your Own Taste

floppy boot stomp
one note at a time
David Rothenberg

A source for news on music that is challenging, interesting, different, progressive, introspective, or just plain weird

Today Is The Question: Ted Panken on Music, Politics and the Arts

My thoughts and writings on jazz and the world around it.

Kyle Gann on music after the fact